(This is a legacy page. It is here for historical reasons and because other sites link to it. XandrOS is no longer available, and as far as I know the company is out of business. The outgoing links to the distribution have been removed because the landing site is no longer online.)

The Skinny: XandrOS 3.0 is a Keeper

Anyone who tests or reviews software longs for those days when a "keeper" comes along. XandrOS Desktop Version 3 Deluxe Edition is definitely a keeper.

XandrOS is one of a number of Linux distributions that are designed from the ground up for desktop users. It's built on Debian Linux, which is revered among Linux users for its maturity and its time-tested stability. The present release of XandrOS runs on Linux Kernel 2.6.9 and uses KDE 3.3 for the desktop interface.

(Note: If you are considering building a Linux box and aren't yet familiar with Linux, please read our introductory Linux pages, which start here, before you purchase any hardware.)

Like most Linux distros (that's Linux slang for "distributions"), XandrOS has very modest minimum recommended system requirements: a 450 MHz Intel Pentium II or AMD K6/II processor, and 256 MB of RAM. This is one of the advantages of building a Linux box: You can save a fortune by buying hardware that's less than bleeding edge. (In fact, I tend to gravitate toward hardware that's a year or so old when building a Linux box. It's more likely to be supported by Linux once it's been on the market for a while.)

For this review, I installed XandrOS on one of my standard test machines, which had the following configuration on that particular day: 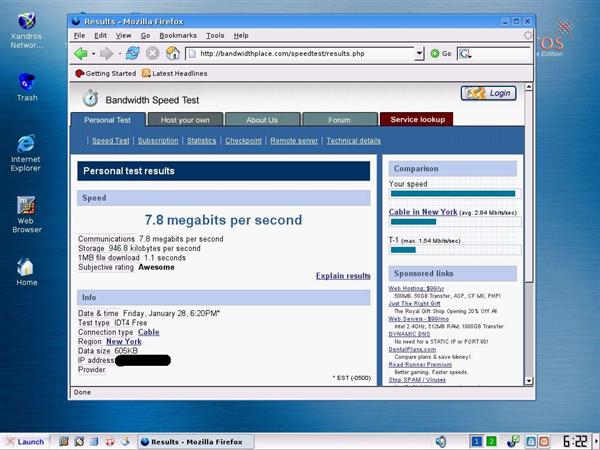 The XandrOS installation went without a hitch and took only 13 minutes, during which XandrOS properly detected and automatically configured all of the computer's internal components (including the integrated NIC and audio card). A "First Run Wizard" that started automatically when I logged into the machine for the first time after installation took care of details like the mouse configuration, date and time, network settings, and printer setup.

In terms of ease of installation, XandrOS is one of the easier Linux distros I've installed. I was asked a few simple questions such as whether I wanted XandrOS to take over the whole hard drive (yes), did I want the minimal, standard, or complete installation (I chose complete), what would the root password be, etc. Nothing mind-bending. (There's also an "express" install that I didn't test, but it's hard to imagine how it could be much simpler.)

I continue to be amazed at the speeds my XandrOS test machine attains on my cable Internet connection. I get about half that on Windows.

(Webmaster's note: At the time this review was first published, 7.8 megabits per second was an incredibly fast download speed. Nowadays, not so much.)

Peripheral and Plug and Play Support

XandrOS effortlessly joined my Windows network and automatically detected and configured all of my networked printers except one (which I was able to manually configure later on). It also properly detected my Palm handheld, my Maxtor USB Hard Drive, my Lexar Jump Drive, and my Epson USB scanner.

To test auto detection of hardware changes, I swapped out the ancient ATi Rage 128 PCI video card for a slightly less ancient Nvidia RIVA TNT-2 Model 64 AGP card. The change was properly detected during restart, and the new card was automatically configured.

In short, I would rate the hardware detection and support of this distribution as excellent.