Have you ever walked across a carpeted floor and gotten a shock when you touched a doorknob, table, counter, or even another person?

That little shock you got was a result of static electricity. It was also many times what is needed to destroy some computer components.

You see, humans can't feel a static shock until it is several thousand volts strong, but it takes less than 30 volts to damage a sensitive computer component such as a stick of RAM or a processor.

That's why computer technicians and home computer builders have to guard their computers against the deadly ravages of static electricity, as well as take steps to avoid injury to themselves. A shock that you can't even feel can seriously damage your homebuilt computer before you're even finished building it.

I regularly get email telling me that I'm exaggerating the risks of static. And in a way, I am. Computer components aren't as static-sensitive as they used to be. There also are other ways to reduce the risk that professional technicians learn over time. For example, if I'm doing something quick like upgrading a drive on my own computer, I'll probably just rest a forearm on the frame of the case while I'm working.

When working on a customer's computer, on the other hand, I take all the anti-static precautions I outline on this page. There's a big difference between taking a chance of frying my own property versus frying someone else's.

The computers that you folks are building are not my property. They're yours. So I'm going to teach and encourage you to take every possible precaution. I believe that's my obligation. I want your first builds to be successful, with no frustration, and a maximum of learning, pride, and fun.

Finally, I know that most of this site's visitors are teens or young adults, most of whom don't have a whole lot of money. I'd hate for you to fry an expensive part that you spent months saving up for. So I do my best to teach you how not to do that.

The most important rules to remember about anti-static precautions are the following: 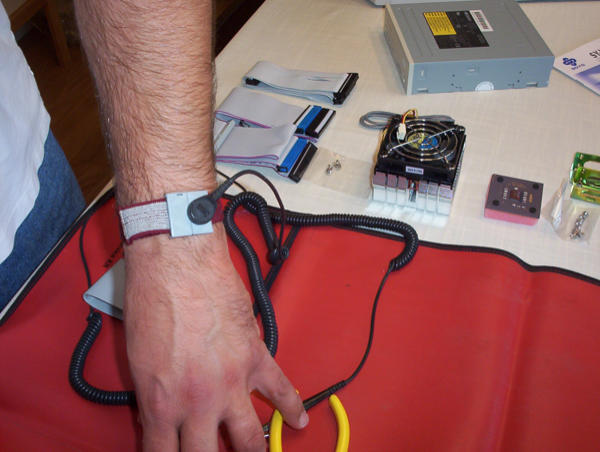 On one end of an anti-static strap is an elastic band that fits around your wrist. The other end has an alligator clip that is attached to a metal part of the computer chassis, which equalizes the voltage between you and the computer, thus avoiding static sparks.

Anti-static wrist straps should not be used when working on a computer that is plugged into a power source. You don't want to ground yourself when the machine is energized. That would increase the risk of electrical shocks to you.

Another alternative to an anti-static wrist strap is to use anti-static gloves when handling delicate electronic components. (Thanks for reminding me about that, Jeremy.) They also will help prevent minor cuts and scrapes from working in the tight confines of the computer case.

Better anti-static kits also include a rubberized anti static mat that is placed below the computer while you are working on it. This not only provides better anti-static protection, but also protects your table from scratches. It falls into the category of not essential, but nice to have.

When at all possible, try to avoid working in carpeted areas. Walking on carpeting greatly increases static buildup within your body.

Always grasp a metal part of the computer chassis with your bare hand before you touch anything inside. Do this even if you are wearing an anti-static wristband. The idea is to equalize the voltage between your body and the equipment you're working on to reduce the chances of static arcing.

Always handle electronic components by a non-conducting (non-metallic) edge. Don't touch the pins or other connectors.

In previous versions of this site, I gave the advice of never plugging an ATX power supply into AC power unless it was connected either to a computer's motherboard or to a power supply tester. Nowadays, most power supplies have built-in loads of about 10 Watts that should prevent any damage; but it's still a good habit not to power up the PSU when there's nothing attached to it.

Always use a UL-approved surge protector or an uninterruptible power supply that incorporates surge and spike protection.

Never eat, drink, or smoke while working on a computer.

Never Use a Wrist Strap while Working on CRT Monitors

I suspect that many readers of this site may never have seen a CRT monitor and are wondering why I even mention them. The answer is that when this site was first built, CRT monitors were the norm; and because this section is safety-related, I figure I may as well leave it here. Who knows. It may save a life.

Even though this site is not about repairing computers, our site stats indicate that a lot of people find this page by searching for the phrase "anti-static precautions." So it's important that I mention the one exception to the rule about always using an anti-static wrist strap:

Never, ever, ever use an anti-static wrist strap while working on an old-fashioned CRT monitor, even if it is unplugged. CRT monitors operate on very high voltages -- sometimes as high as 40,000 volts -- and their capacitors can hold these voltages for a very long time even when the monitors are unplugged. I should add that this also goes for old-fashioned CRT televisions.

To put things very simply: If you happen to touch a CRT monitor's charged flyback transformer or its anode while you are grounded to the monitor's chassis by a wrist strap, even if the monitor is unplugged, you probably will die. No joke. I'm very serious about this. So don't do it.

Even if you're not grounded to the monitor or television's chassis, touching the flyback transformer or the anode can knock you on your butt. They really do pack a wallop. It's not something you want to learn for yourself. Trust me on that. (Don't ask me how I know.)

Even when CRT monitors were the norm, professional computer technicians rarely worked on them; and you shouldn't, either. They sent them to TV repair shops.

An LED or LCD monitor doesn't require nearly as much voltage, and you should wear an anti-static strap when working on them (while they're unplugged from the power, of course). But unless you're an advanced sort of geek, you should probably leave monitor repairs in general to a professional. Although they tend to be easy to actually fix, the diagnosis of LED or LCD monitor problems can be tricky. Most times the problem is either a failed inverter or a failed back-light bulb; but there can also be other causes, including software problems. Diagnosis, therefore, can be very tricky, even if the actual repair is easy.