So Your Kid Wants to Build a Computer 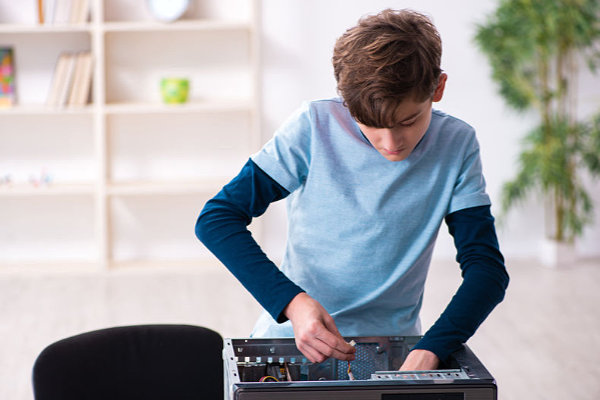 If you're reading this page, I have to assume that you're the parent of a teen who has told you that he or she wants to build a computer. And unless you have a bit of a geeky streak yourself, you're probably wondering why on earth they would want to do that when it's so easy to just buy one.

For most youngsters, the answer is that they want to build computers for gaming. Before you dismiss that as trivial, consider that games are among the most demanding computer applications around.

For the best gameplay experience, gaming computers need to be not only powerful, but well-designed and with an eye toward optimizing the performance of the particular games the player uses most. They can therefore be a real challenge to design and build.

In fact, designing and building a good gaming computer is likely to be the most challenging math, physics, research, and economics assignment your teen-aged son or daughter has ever undertaken.

Why You Should Encourage Your Teen to Build a Computer

The short answer is because the process of designing and building a computer is a well-disguised educational project. The youngster may be doing it because it's fun; but it's actually a protracted lesson in applied mathematics, science, and economics, all masquerading as part of a game.

The typical teen-aged computer builder will spend weeks or months agonizing over every last detail of their design. They'll research the optimal resource needs for the games they want to play, how well the parts they're considering will work with each other toward optimizing their gameplay, where performance bottlenecks are likely to occur in their designs, how much their ideal builds will cost, and where to make compromises to keep their actual builds within their budgets.

Once they have a basic idea of what they want to build, they'll almost certainly reach out to other computer builders on online forums like Reddit for additional input. These forums are populated by builders ranging from first-timers to professional computer technicians and engineers. The more knowledgeable folks share their advice with the newer ones, including the "whys" behind their suggestions and explanations.

In summary, you should encourage your teen's interest in building computers because it will be one of the most educational experiences of their lives.

How You Can Help

If you yourself happen to have an interest in computers or technology, then perhaps you can work and learn alongside your teenager in designing and building a computer. Even if you know very little about it, you can help your teen by asking them to explain the steps in the design process to you -- in effect, having them teach you how to build a computer. Teaching something is one of the best ways to learn it.

Another way you can help is by conditioning financial assistance on explanations. In other words, if your teen wants money to buy a particular processor, GPU, motherboard, case, etc., ask them to justify it using math and science. "Because it will make my games run faster" is not an acceptable answer. Send them to Reddit (or whatever forum they're using) and tell them to come back when they can explain why that part will make their games run faster.

Finally, and most of all, just be supportive. Don't dismiss their interest just because it's based on playing games. I'm not a gamer myself. I've been staring at computers since the 1970's, and staring at them some more isn't the way I like spending my free time. But I love when young people want to build gaming computers because I know that the design process will give their brains a workout that few other hobbies can match.