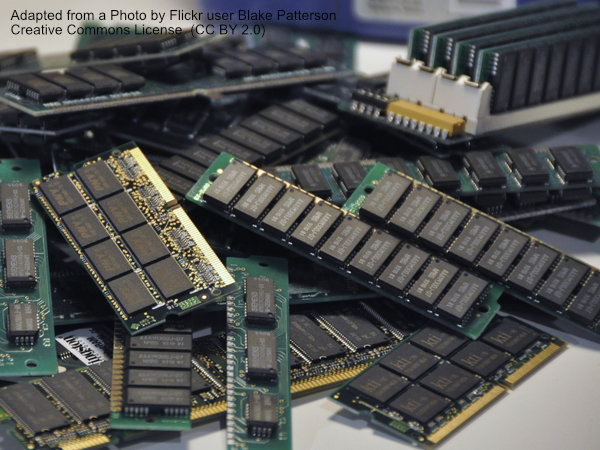 For all practical purposes, the type of RAM you use will be determined by the motherboard you choose. This is because all but a very few motherboards are able to use only one type of RAM.

In fact, the only motherboards I can recall seeing that would accept more than one kind of RAM came out when RAMBUS did. They were able to use either inexpensive SD-RAM, or the much more-expensive RAMBUS RAM. But those motherboards were the exceptions rather than the rule.

If your budget allows for it, I suggest you check your motherboard's documentation and use the fastest speed RAM that it supports.

For example, if you have a choice between DDR4-2133 and DDR4-3200, choose DDR4-3200 if you can afford it. RAM speed is one of the few things in a computer that almost always makes a noticeable difference. We'll talk about the amount of RAM a little further down this page.

If you're building a new computer on the same day I'm revising this page (in February of 2021), chances are you will be using DDR4 RAM. That's the current standard and the fastest-available RAM on the market today. I've been reading about DDR5 RAM being right around the corner for years; but so far, I don't know of a single chipset or motherboard that supports it.

Right now, today, the best you can do RAM-wise is to use DDR4 RAM in dual-channel configuration.

When using dual-channel DDR, pairs of identical RAM modules work in tandem to greatly improve performance. Both the size and the speed of each RAM module in a dual-channel pair must be identical. I actually like to use identical RAM in all the slots: same size, same speed, same manufacturer, and same model. If I can get sequential sticks that came of the assembly line together hand in hand, then that's what I want.

Fortunately, it's pretty easy to do exactly that. If you want RAM that's as identical as possible and probably rolled off the assembly line on the same day, just buy RAM sets of the capacity that you need. That's what I always do when I build a new computer.

How Much RAM do I Need?

Dollar for dollar, nothing will liven up your homebuilt computer more than endowing it with a respectable amount of RAM. In addition, because RAM is so central to your computer's functioning, always choose RAM made by a reputable manufacturer like Crucial, Corsair, Kingston, Samsung, or G.Skill. If you're a gamer or power user, also consider RAM coolers.

Every operating system has "minimum system requirements" for processor speed and RAM; but in my experience, the minimum requirements are grossly inadequate for the computer to be able to do anything useful. Instead, I suggest the following RAM amounts for desktop PC's running standard desktop software (word processing, spreadsheets, etc.):

Linux or other Unix-like system with X-Server, 32-bit: 4 GB

If you use your computer for gaming, graphics manipulation, video editing, CAD/CAM applications, or complex mathematics, then I suggest at least doubling the higher numbers in the above recommendations for 64-bit operating systems.

For example, the computer I coded this page on has 32 GB of RAM because I use it for frequent photo editing and light video editing, as well as lower-stress work like coding Web pages. My Linux laptop, which I use for light video editing and compiling binaries, has 16 GB. I'd actually use 32 GB if it supported it, but 16 GB is all the BIOS will support on that laptop. But my video-editing computer has 64 GB of RAM so it can easily work with 4K video.

My most recent homebuilt computer was designed and built specifically for heavy-video editing and transcoding. I designed it around the Intel Core i9-9900k processor and endowed it with 64 GB of DDR-4 RAM. That would be overkill for almost anyone; but rendering, encoding, or especially transcoding long videos can use huge amounts of memory.

I chose G.Skill Ripjaws memory for that machine because in my recent experience, I've found it to be extremely stable and reliable under sustained load, and also to be a very good value. As of this revision (in February of 2021), G.Skill is still my go-to RAM. It just seems to deliver the best bang for the buck for my needs.

Aside from that exception, it's really impossible to have "too much" RAM, up to what the motherboard and operating system will support. But there does come a point when you won't realize any benefit from having more RAM (or in other words, wasting your money).

If I were building a computer using Windows 10 64-bit for a clint to do word processing, check email, surf the Web, and watch streaming video, I'd recommend 16 GB and settle for 8 GB if that were all the client could afford. It's doubtful an average user would notice any improvement with more than 16 GB.

But I'd also choose a motherboard that could support at least 64GB of RAM (and preferably more) just so it could easily be upgraded later if the user's needs were to change. If they wanted to do higher-end video editing, CAD/CAM, or other RAM-intensive work, I'd recommend 32GB to 64GB, or even more in a few use cases.

Long story short, how much RAM you need is a function of how you plan to use the computer. If you're on a tight budget, I suggest that you skimp elsewhere (for example, by buying a less-fancy case), and also choose a motherboard that can support more RAM if you ever need to upgrade.

Long story shoty, I suggest that you don't mix RAM speeds. That's just my own opinion, however, based on my own experiences and nothing more.

In theory, if you mix RAM speeds, all of the modules should clock to the lowest speed; but in practice, mixing speeds (and sometimes even brands) in the same PC can cause serious system instability. (And of course, dual-channel DDR must use matched pairs of identical modules.)

I continue to recommend using identical RAM sticks in any given computer, right down to the manufacturer and model, whenever possible, to maximize stability and minimize the possibility of conflicts. That's what I believe is best based on decades of experience.

Technically, however, you can mix manufacturers, and even speed, if you want to. But my experience has been that the probability of memory conflicts is much lower when you used matched sets of RAM.

I've solved many problems with clients' computers over the decades by replacing all the RAM with identical sticks, even when they all tested okay individually. But again, just to be clear, that's just one man's opinion based on one man's experiences.