The history of the PC has seen many different types of expansion slots. Some, like the MCA (Micro-Channel Architecture) interface, and the Video Electronics Standards Association's VESA interface, never really caught on and have quietly faded into history. Even newer interfaces such as the PCI and AGP interfaces have been replaced by the PCI-Express interfaces, which is now used for almost all expansion cards.

The diagram in this picture is a bit dated, but in a way that's good because it also identifies some older interfaces such as the floppy drive and EIDE headers. These won't be present on any new motherboard you buy, but they could still be helpful if you find yourself repairing or upgrading an older computer This is a picture of a Gigabyte GA-M61VME-S2, along with its diagram from the motherboard manual. 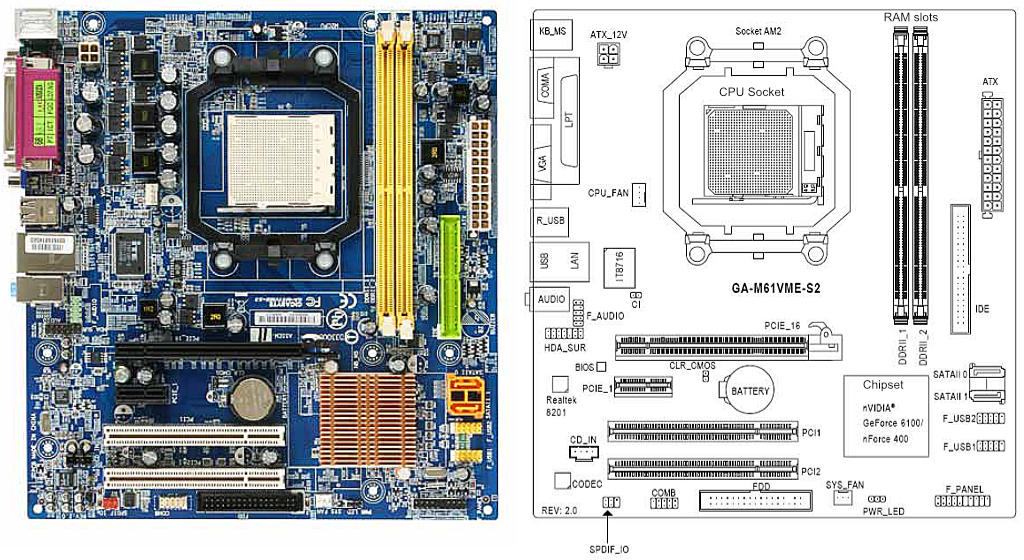 This image should give you a pretty good idea of what the major components of a motherboard look like. Your motherboard's manual should also have a diagram help you find the components on your particular mobo, and you should read it before you even take the motherboard out of its box.

The three most common expansion interfaces in current use are:

The bottom line is, when choosing a motherboard for your homebuilt computer, double and triple-check to be sure that it has enough of the correct types of slots to accommodate the expansion cards you wish to install.