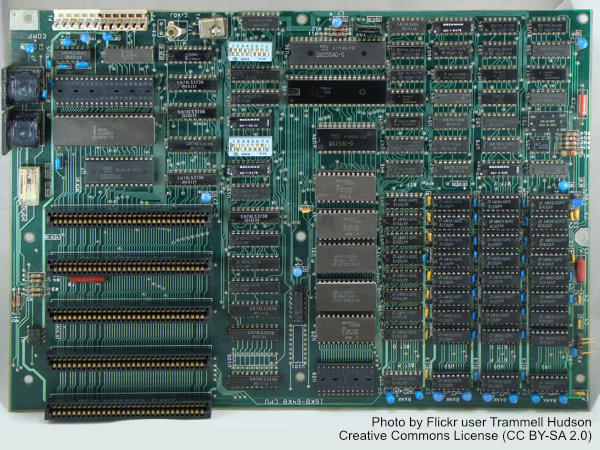 Early in the history of the personal computer, the motherboard (also called the mainboard) was little more than a skeleton to which the CPU, chipset, BIOS, sometimes the RAM, and other boards called daughter boards or risers, were attached.

The daughter boards contained such peripherals as the drive controllers, input/output controllers, sometimes the memory banks, and other devices.

The motherboard shown here is from the original IBM PC.

Nowadays, virtually all motherboards (or mobo's, to those in the know) integrate these components onto the motherboards themselves. Devices that are included on modern motherboards, but which typically were separate components in earlier PC's, are commonly known by the somewhat oxymoronic term integrated peripherals.

As an aside, some parts that used to be mounted on the motherboard, such as the L2 and L3 CPU caches, are now typically mounted on the processor itself, which greatly increases processing efficiency.

Being able to identify the components on the motherboard is essential to any home computer builder. It's also a great way to impress family and friends: "That's the SATA connector, right there next to the chipset." The picture shown here is of a pretty typical motherboard at the time of this writing and points out a few of the major parts. But you should always read the motherboard manual to locate the rest of the parts. They'll all be labeled on the motherboard itself, but the type usually is very small. It's easier to narrow down your search if you look at the diagram in the manual first. 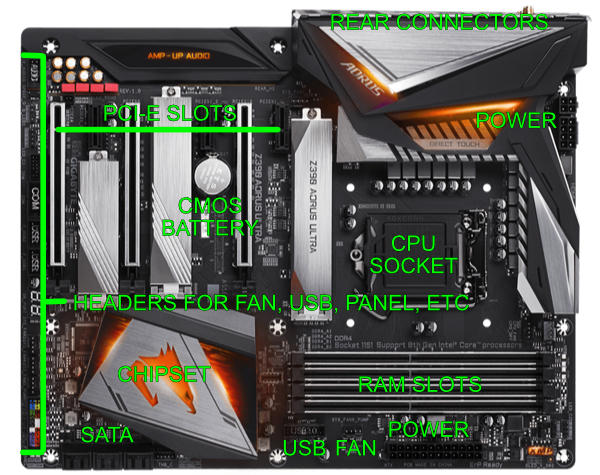 Connections for the hard drive and other drive and storage devices. Most boards being manufactured today have only SATA connectors. EIDE headers are history (although a very few modern motherboards still have them), and floppy drive headers are ancient history.

Connectors for the USB, COM, audio, and/or FireWire ports, as well as for case fans, processor fans, liquid CPU cooler pumps, and panel LED's and controls.

Expansion slots that can accommodate aftermarket expansion cards for audio cards, video cards, network cards, and so forth. PCI-ex slots are the most common expansion slots at the time of this revision.

Some motherboards also include on-board audio, video, network, or modem capabilities. These are built right onto the motherboard (usually embedded in the chipset or sometimes the CPU) and are configured through the BIOS setup.

Integrating peripheral components like audio cards and network cards onto the motherboard helps keep the cost of a new computer down by reducing or eliminating the need for add-on cards. It also simplifies assembly because there are fewer cards to install. The quality of built-in components, however, ranges from awful (on el-cheapo boards), to excellent (on high-end boards). Depending on how you're using a computer, you may or may not be happy with the on-board components.

Another downside to built-in cards is that they usually are neither repairable nor upgradeable. That's one reason why most motherboards that feature integrated audio, video, modem, or network interface cards also offer the option to disable the onboard devices and install add-on cards to take their place if the integrated cards should go belly-up, become obsolete, or simply not suit your needs. It's always best to disable failed components in the BIOS to prevent resource conflicts. Many times, BIOS continues to believe that a component (especially a network adapter) is functional even after it burns out.

You should also disable integrated devices that you're not using because they didn't suit your needs, such as when you replace a built-in GPU with a gaming video card or a video card with a TV tuner. Some motherboards will sense when an add-on card has been installed and will disable the built-in device automatically; but on other boards, you will have to enter BIOS setup and disable the device, usually in the "Integrated Peripherals" menu. Very rarely, you may even have to locate and move a jumper on the motherboard to disable an onboard component.

Non-Windows Operating Systems and Onboard Components