How to Build a 4K Video Editing Custom Computer 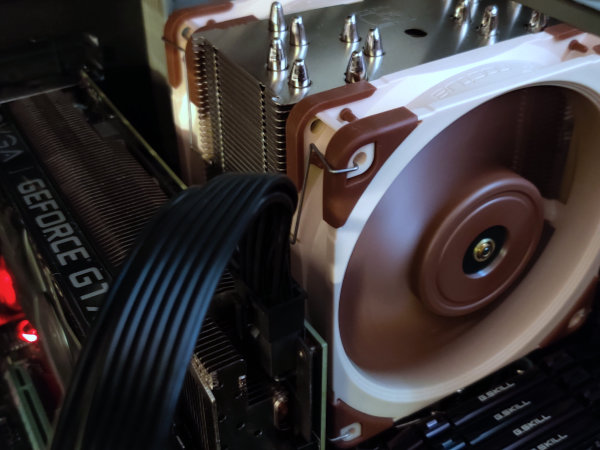 One of the situations in which building your own computer can save you a lot of money is when building a computer custom-made for high-end video editing. Factory-built computers with powerful-enough hardware to run serious video editing software commonly cost at least twice as much as the parts needed to build a high-end video-editing computer yourself.

The reason why factory-built special-purpose computers cost so much is because they're specialty items that only professionals and serious enthusiasts need. Because the demand is so low, the companies can't just set up an assembly line to build bazillions of custom computers.

That's why the least-expensive way to get a PC powerful enough for serious 4K video editing almost always is to build it yourself; and it's why when I found myself in need of such a machine, that's what I did.

Although I built this computer specifically for video editing, its design would also make a good starting point for a machine for other resource-intensive tasks such as CAD/CAM, 3-D modeling, gaming, or heavy-duty number-crunching. Be sure to choose components that are well-supported by the software you plan to use, however. Don't just copy my design. I don't mind at all if you do, but it might not be suitable for your needs.

All of the pictures on this page are of the actual computer being discussed here. This page will explain the reasoning I followed when designing and choosing parts for this custom, single-purpose computer.

Planning and Designing a Special-Use Computer

As is the case with any purpose-built computer, designing a custom video-editing computer begins with the hardware requirements of the software it will be running. This goes beyond meeting the minimum system requirements of the software. You want to choose hardware that will maximize the software's performance. In other words, you want to choose the hardware that will work best with the video-editing software that you'll be using, not just hardware that's "good enough." Choosing the right hardware will enable your software to run more smoothly, calculate transitions and effects more quickly, and dramatically speed up rendering.

Video-editing software in general tends to be particularly picky about hardware, but in my case there was an additional twist: The different video-processing programs that I use have different GPU requirements. Most notably, Magix Video Pro X needs an Intel integrated GPU for hardware encoding; but other software, such as Adobe Premiere Pro, works best with an NVIDIA GPU. All of the programs "will work" with any GPU; but to work at their best, they need a GPU for which they're optimized.

As mentioned, the requirement that complicated this build was that Magix Video Pro X (and its consumer-grade sibling Magix Video Edit Pro) requires an Intel GPU for hardware encoding. If the machine doesn't have one, it can still encode; but the rendering process will take as much as ten times as long. The machine therefore had to be designed around an Intel processor with integrated graphics.

I didn't plan to actually connect a monitor to the Intel video output, however. The computer would also have a discrete graphics card to maximize performance with my other software, and I planned to use the discrete card for the monitor, as well. To make the Intel graphics available to Magix, I needed an HDMI dummy plug. Windows won't fire up the Intel graphics unless it believes there's a monitor hooked up to the integrated graphics output. The dummy plug fools Windows into believing that it's a monitor, making the Intel GPU available to Magix for encoding purposes.

The only catch to using a dummy plug is that if you're also using a discrete video card (which obviously would be the case if you're dummying the integrated graphics), then you have to get into BIOS and configure the system to use the add-in card as the first boot display. Otherwise, the default is usually to use the integrated GPU if the system detects a monitor connected to it (which it will if the dummy plug is installed).

Choosing the Best Processor for my Custom Video-Editing Computer

As I mentioned, the need to use an Intel processor with integrated graphics influenced the entire design and build process for my custom video-editing computer. I chose the Intel Core i9 9900k because it's an extremely powerful processor, it has integrated graphics, and it happened to be on sale when I needed to build the computer.

My original plan had been to use one of the higher-end Intel Core i7 processors; but with the i9 on sale, the difference in price wasn't very much, so I decided to go with the i9. Hopefully, I also bought a couple of extra years before obsolescence kicks in, as well. It's a pricey chip.

I did need Intel graphics, however, and money was an object; so I chose the Intel Core i9. It was the best-available processor for this computer's mission, and it was on sale.

My choice of a motherboard was informed by my choice of processor. I needed a board with an LGA 1151 socket, that supported the i9-9900k processor, and that supported at least 64 GB of RAM. I also wanted a board using the Intel Z390 chipset or newer; and I preferred an mATX form-factor board because I planned on using the Thermaltake V21 case (more about that later).

After about a week of looking up specs and checking reviews, I decided to purchase a Gigabyte Z390 M Gaming MicroATX motherboard. It met all my requirements, and I've had positive experiences with Gigabyte motherboards in the past. 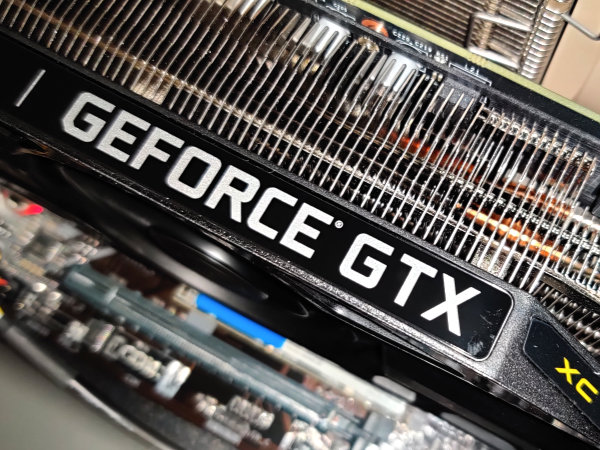 Choosing the best GPU for a custom video editing computer is critical. When choosing a GPU, you should be guided by the hardware recommendations of the software that you will be using. Of particular importance are choosing a GPU that your video-editing software can use for hardware encoding, which will dramatically speed up rendering times; and choosing a card with a sufficient amount of video RAM (VRAM). For 4K video editing, you'll want at least 8GB of VRAM for shorter videos, or at least 16GB of VRAM for longer videos.

In my own case, I also needed hardware-encoding support for several different video processing programs. My preferred video editor for most of the work I do, Magix Video Pro X, requires an Intel GPU for hardware encoding. All of the other video-processing software that I use, however, works best with an NVIDIA GPU. Magix also uses the NVIDIA card for encoding in HEVC format.

The i9 processor has onboard Intel video that Magix supports for hardware encoding. For the rest of my video-editing software, I chose an NVIDIA GeForce GTX 1660 discrete video card. There are faster GPU's, but most of the videos I edit are short. In concert with the powerful Intel i9 system processor, the GTX 1660 makes quick work of even my most demanding video-editing and transcoding jobs. Usually, I can go get a cup of coffee when I start the render, and the rendering will be done by the time I get back to my desk. If you edit longer videos, however, you may want to aim a bit higher.

The long and short of it is that when choosing a video card for a video-editing computer (or any special-purpose computer), be guided by the hardware requirements of the software you'll be using, and make sure to choose a GPU with sufficient RAM for the work you typically do.

Video processing is very CPU-intensive, and the i9 puts out a lot of heat; so adequate cooling was a must. I considered liquid cooling, but ultimately I decided to use a Noctua NH-U12A processor cooler and a Noctua NF-P14s redux-1500 PWM 140mm cabinet fan. Noctua fans and coolers are about as good as you can get, and they all come with six-year warranties as of this writing (in April of 2020).

When using a large, non-standard cooler, you also have to check its compatibility with the motherboard and the case. Some coolers simply won't fit in a given case, or will block or otherwise interfere with motherboard components (especially the PCIe and RAM slots). Check and double-check to make sure that all your components are compatible. 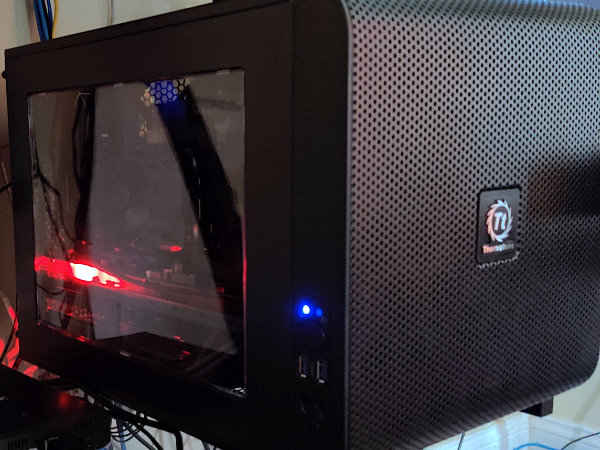 The need for cooling also influenced my choice of a case. There are only so many cases smaller than a refrigerator that can accommodate a Noctua NH-U12A cooler, and the Thermaltake Core V21 is one of them.

Other things I like about the Core V21 are that it has a 200mm front-panel fan, plenty of drive bays and tie-off points, perforated panels for better ventilation, removable magnetized dust screens, and plenty of room inside for excellent airflow.

In short, the Core V21 may not the fanciest case on the market, but it's one of the most functional, especially in terms of ventilation. It's my preferred case for computers that will be generating a lot of heat. Between the 200mm front fan, the 140mm rear fan, and the processor cooler fans, cooling should never be a problem with this build.

The Thermaltake Core V21 also has one tempered-glass side panel so you can watch the internal RGB LED's flashing, if you're into that sort of thing. I'm pretty indifferent to LED's, but lots of people like them.

Although I rarely burn DVD's anymore, I also bought an external USB 3.0 Blu-Ray DVD writer for those occasions when I do.

I used an unused Corsair 650-Watt modular power supply that I already had in stock. In general, when choosing a power supply, choose a high-quality brand with a good reputation and at least 25 percent more capacity than you can imagine yourself ever needing. Power supplies run cooler and last longer when they're not pushed to their extremes, and a little extra capacity provides headroom for future component upgrades.

The power supply is not a place to pinch pennies. A bad power supply can destroy your entire system. Stick with respected brands and models that have good histories of positive reviews. 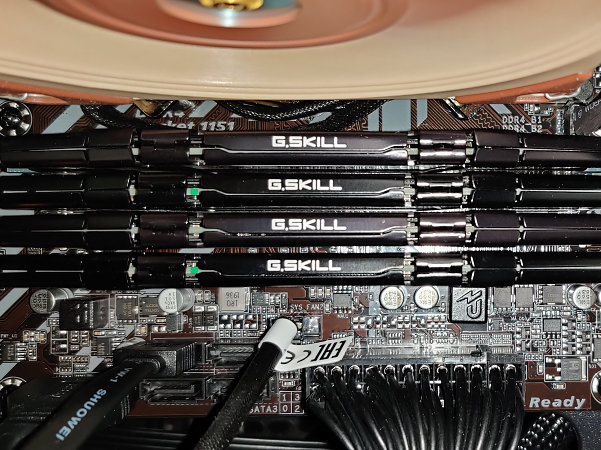 I decided to endow this computer with 64 GB of RAM because transcoding long videos consumes a huge amount of memory.

For almost any other use except extreme gaming, 64 GB would be an absurdly high amount of RAM. An average Windows 10 system will work just fine with 16 GB of RAM, and acceptably with 8 GB of RAM.

Video encoding and transcoding, however, are very memory-intensive; so a machine designed for that work needs a healthy endowment of memory. In addition, because video processing involves operating at sustained high loads, you need high-quality RAM that can handle sustained loads without overheating.

I chose G.SKILL DDR4 3200 Ripjaws RAM because I've had excellent experiences with G.SKILL Ripjaws memory under sustained loads in multiple machines. It's exceptionally heat-stable, being primarily marketed to gamers; but I've found it to be excellent, reliable, stable memory for any hard-working computer. It's also not very expensive, making it an excellent value for the buck. I used four sticks of 16GB each for this machine.

Obviously, the operating system you use will be the one that best supports the application software you plan to use. All of the video-editing software I planned to use on this computer is available in Windows versions, so I chose Windows 10 Professional 64-bit. I chose Professional because it provides better control over updates and privacy then the Home version does. It also connects to a Windows server domain, if your office uses one. All of the hardware used to build this computer should also work with Linux, however, if that's the platform you use for video editing.

Was it Worth It?

The first video I edited using the new machine took seven minutes to render. The same video had taken more than an hour to render on another machine. Because I do video editing for business purposes, time is money; so yes, I'd say building a machine designed specifically for video editing was well worth the time and money.