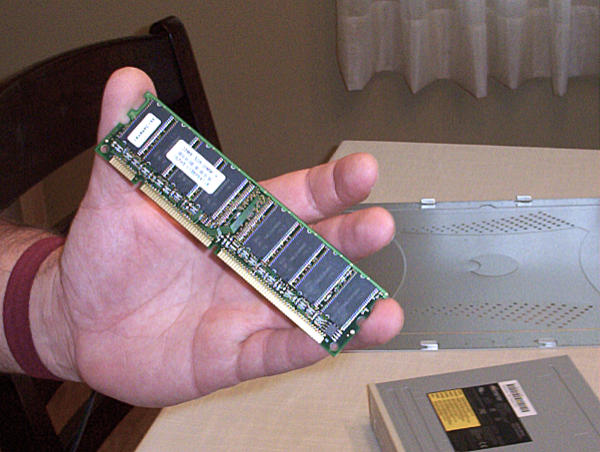 Like processors, RAM modules are sensitive to static charges and should be handled very carefully.

Never touch the metal conductors of a memory module, and only handle RAM modules by their edges. Nothing feels quite as bad as destroying a perfectly good (and expensive) stick of RAM.

You can learn more about anti-static precautions here.

Before actually installing the RAM modules in your computer, check again to make sure that the RAM you have is of the correct type and speed for your motherboard.

Most computers at the time of this revision use DDR-4 memory modules, but double-check to make sure. There should be a label on the RAM that will have its speed, type, and size printed on it.

If using a dual-channel memory configuration, make sure that the RAM in both slots of the bank match each other. I like to use identical RAM sticks (same size, same speed, same manufacturer), especially in dual-channel configurations.

Proper Insertion of the RAM Modules 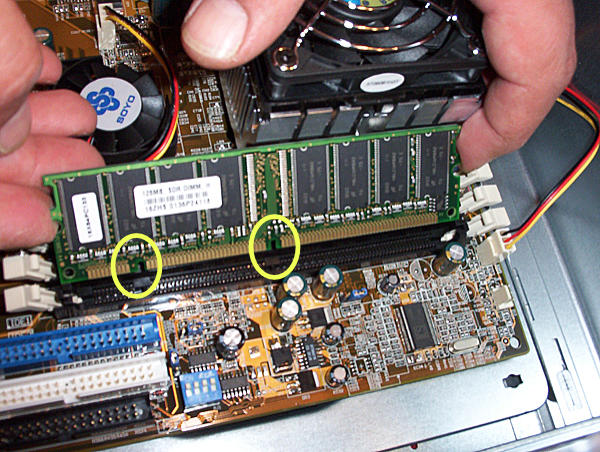 RAM modules are keyed with little notches that fit over corresponding tabs in the RAM slots. I've circled them in this picture.

Before inserting the RAM module, make sure that the notches and tabs are correctly lined up. If there are more notches than there are tabs (or vice-versa), then you have the wrong RAM for your motherboard.

The same thing applies if the notches and tabs don't match up. You either have the wrong RAM, or you're holding it in the wrong direction. Try flipping it around.

If the notches and tabs still don't match up, then it's the wrong RAM, and all the force in the world won't make it fit.

Once you're sure you have the right RAM, to actually insert it, simply push it firmly, straight down into the slot, and push the retainer clips inward. That's it.

Which Memory Slots to Use

If you are using SDRAM or single-channel DDR-SDRAM, then it usually doesn't matter which modules go into which slots. But a few motherboards require that you start with the first slot and fill them in order, so you may as well do it that way.

If you are using DDR memory in dual-channel configuration, however, then you must fill the two slots of each RAM bank that you're using with identical sets of RAM. Usually the slots of each bank are of the same color, but read your motherboard manual to make sure.

The RAM sticks in each bank must be the same size. In addition, although it is not technically required, I recommend that the two banks also be identical (same speed, same size, same manufacturer, same model). In fact, I like using all identical sticks of RAM in any computer I build to prevent problems with subtle timing differences.

Each bank of RAM must have the same size and speed of RAM in both slots in a dual-channel configuration. If the RAM modules are not the same size, the system either will default to single-channel mode, will only run the amount of RAM on the smaller stick in dual channel, or will not work at all, depending on the motherboard and the memory architecture.

Also in theory, when different speed RAM modules are used, all of the RAM should clock to the speed of the slowest module. But in reality, I've found that mixing RAM speeds sometimes causes system instability. So I strongly recommend that all of the RAM installed in your computer be of the same speed.

In fact, in practice, I just use all identical sticks in any given computer. I've even removed perfectly good RAM when doing an upgrade, just so all the sticks in the machine would be identical. No, that's not strictly necessary. But I find I have fewer problems that way.

My favorite RAM manufacturers for hard-working machines are are G.Skill, Corsair, Crucial, and Kingston. I've never had any problems with RAM from any of those manufacturers. But there are many other companies that make good RAM.

Now that you've installed your computer's RAM, let's move on to the next step: Installing Expansion Cards.