There are several different types of storage drives you can use in your homebuilt computer. For purposes of assembly, the form factor and type of interfaces are the important differences.

At the time of this revision, PATA drives are obsolete; but are still available if you need or want to use them for some bizarre reason (such as if you're repairing an older machine rather than buying a new one). The information about PATA drives has been moved to a legacy page for historical reasons, but I seriously doubt you'll need to read it.

SATA (Serial ATA) hard drives are still in widespread use, but are starting to be replaced by NVMe M.2 SSD drives that attach directly to the motherboard or to a PCIe adapter card. A common arrangement is to install the operating system and applications on an NVMe drive, and use a SATA SSD drive for storage.

You can read more about NVMe drives themselves here, or more about how to install them farther down on this page.

SCSI drives are still available, but very few home users choose them because of their high cost, their complexity, and the lack of any real advantage over SATA or NVMe for the vast majority of users. I deleted the SCSI pages a long time ago because they got almost zero traffic. 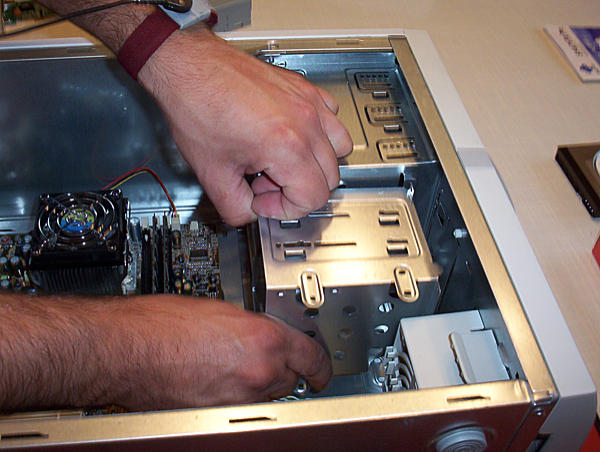 The case that was used for most of the illustrations in this site had a detachable "cage" for the 3.5-inch hard drives that were standard back then.

This is still a very popular design for 3.5-inch drives because it eliminates the need to remove the side of the case behind the motherboard to access the mounting screws.

In a case using this design, the cage is first removed from the case, the drives are mounted into the cage, and the cage is reinstalled into the case. This design speeds up assembly and helps reduce scraped knuckles from working in tight spaces.

As a former (now-retired) computer tech, I like this sort of case design because it makes it a lot easier to remove and replace the drives if the need arises or if you want to upgrade in the future.

Another nice case design allows the drives to be installed from the front of the computer by simply sliding the drives in or out. The SATA connections are built into the bays and connect when you push the drives in. Most server-style cases use this method, making them a good choice if you either want the ability to easily add and remove drives frequently (for example, if you do data recovery work), or if you plan to install a lot of drives in your computer. 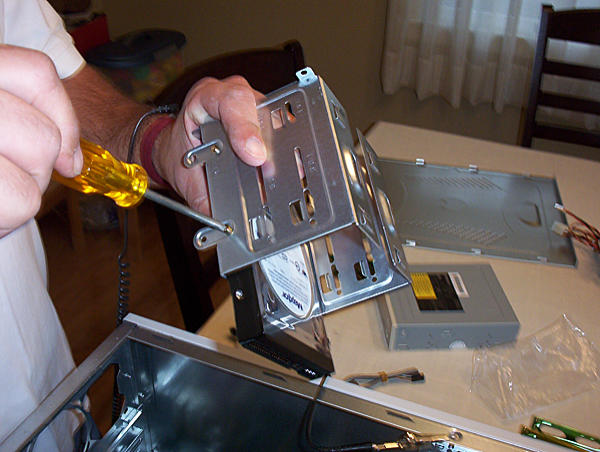 For this project, however, the builder (my brother) used a case with a hard drive cage. In this picture, he is installing the hard drive into the cage using four mounting screws.

This is still how most drives are mounted, but some case designs eliminate the need for screws by using tabs or brackets.

Screwing a hard drive into the case may seem simple, and it is. But it's also an opportunity to mess up your drive. Make sure that you use the correct screws and that they're properly threaded into the holes.

Don't force the screws. The screws and the holes are easy to strip. If the screw doesn't turn easily, then it's not properly threaded into the hole. Pro tip: Try turning it backwards (counter-clockwise) to find the spot where it seats itself properly.

Also make sure that you use the correct holes so that the cage will fit back in the case properly. There are three holes on each side of a 3.5 inch drive, but usually you only use two screws on each side. Which two you use determines how far forward or back the drive will be mounted and weather it fits into the case properly.

If you are mounting a front-accessible drive (such as an optical drive, floppy drive, ZIP drive, or card reader) in the same cage, then make sure you mount the front-accessible drive in the position behind a suitable opening in the front of the case. If you don't need that bay for a front-mounted device, you usually can use it for a storage drive if it's more convenient. 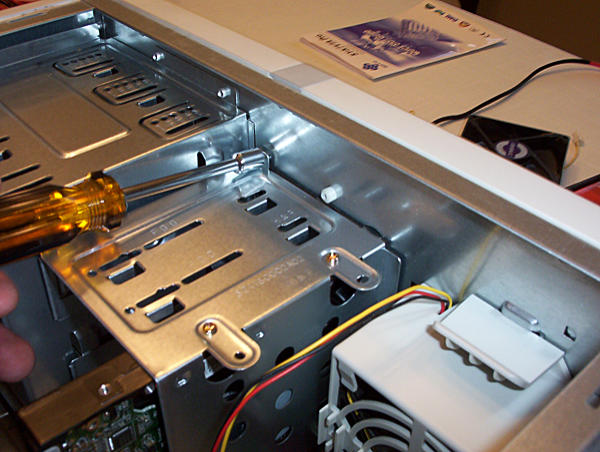 In this picture, the builder is reinstalling the cage into the computer case after having fastened the hard drive to the cage.

A lot of people ask me, "Is it really necessary to use all four screws to mount the hard drive?"

My answer is yes if you're using HDD (spinning disk) drives. Using four screws reduces the chances of annoying buzzing caused by vibrations.

Yes, it can be a pain to reach all the screw holes sometimes. But it's a more professional way to build a computer and will help prevent noise problems later on.

Some cases use friction mounts or rubber bushings to reduce hard drive vibration. Using them will help reduce your computer's noise and may help protect the hard drive from external vibrations (such as accidentally hitting the computer with your foot while sitting at your desk). 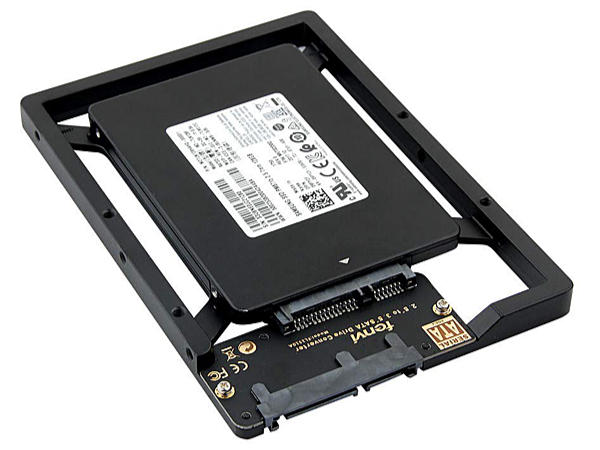 If you're using SSD (solid-state drives), then I still recommend using all four screws if possible. But because they have no moving parts, using two screws to mount an SSD is acceptable if it would be a real problem to use all four.

If you'll be using a 2.5-inch SATA SSD drive in a 3.5-inch bay, you may need a 2.5-inch to 3.5-inch bracket like the one shown here to mount the drive in your case. But check first. Some 3.5-inch bays have screw holes for 2.5-inch drives on their backplates.

All SSD drives (at least that I know of) are either 2.5 inch ("laptop-sized") or mount directly on the motherboard. All newer cases have at least one or two bays that will accommodate 2.5 inch drives, but some older cases don't.

This is the type of part that people often skimp on. My advice to you is not to do that, especially if the adapter has any electrical connections. It would be terrible to damage an expensive SSD because you wanted to save a dollar on a bracket. If it has electrical connections, consider a hard drive bracket as important a part as any other electrical component of the computer.

If it's just a plain bracket without electronics, however, and you plan to run a SATA cable directly to the drive, then pretty much any bracket will do. It's only if it has electrical connections that you have to be super careful. 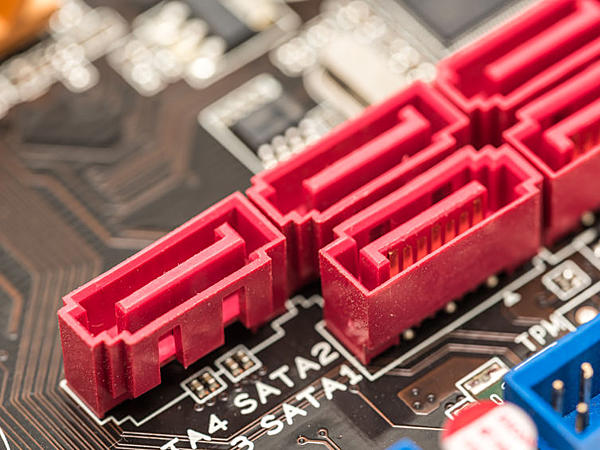 The SATA headers on the motherboard will look something like the one in this picture. On some motherboards, however, they will be mounted flat rather than standing up.

By convention, the system drive is usually attached to the lowest-numbered SATA header (either SATA 0 or SATA 1). The exception would be if that header is disabled because you're also using an M.2 slot on the same channel. Let me explain that, because it trips up a lot of newbies.

So if, for example, your M.2 slot shares a lane with SATA 0 and SATA 1, you would leave those two headers empty and start with SATA 2 if using the M.2 slot. You can find this information in your motherboard manual (which is one of the reasons you should read it before you start assembling your computer).

Other than that, it really doesn't make much of a difference which connectors you use for SATA drives. There are no master / slave relationships to worry about like on old-fashioned PATA drives, and therefore no jumpers to configure.

One end of the SATA cable should be inserted straight down into the connector, and the other end to the drive. The cables and connectors are keyed to prevent improper attachment, so don't force them. They're just plastic and can be broken or deformed very easily, in which case your motherboard or drive will be ruined If you encounter too much resistance when attaching a SATA cable, you're probably trying to attach it backwards. 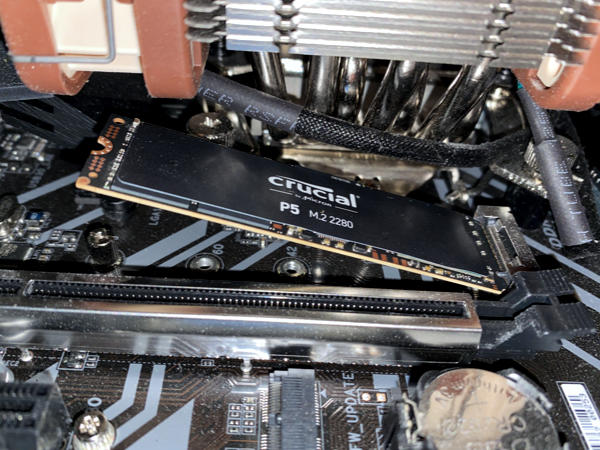 A lot of people confuse NVMe with M.2. But M.2 is just the form factor. SSD drives that attach to the M.2 slot may be NVMe or SATA. (NVMe drives are the faster ones.)

The Crucial NVMe solid state drive shown in this picture is one that I recently installed in one of my own machines. I like Crucial SSD's a lot. I've had excellent luck with them.

When installing an M.2 drive, the most important thing to remember (aside from anti-static precautions) is, for the love of all things good and holy, don't drop the M.2 screw.

If you do drop the screw, make absolutely sure it didn't fall somewhere inside the computer where it could short something. Those screws are small enough to get into all kinds of places where they can do damage.

Because they're so easy to lose, I suggest you buy extra M.2 screws if you plan to make building computers a hobby. You can order spare M.2 screws here.

The other thing to watch for is that most M.2 slots can accept drives of different lengths, so they have threaded holes for standoffs to accommodate those different lengths. Make sure that there are no standoffs installed except the one you need for the drive you're using. If you look at the picture above, you'll see the empty holes under the drive. That's not a mistake. It's how it's supposed to be.

Aside from that, M.2 drives are very easy to install. The end opposite the screw has contacts that you insert in the slot at about a 30-degree angle, and then push in and down from the screw end until the drive lies flat against the space on the motherboard or expansion card. Then you fasten it down with the M.2 screw. Easy peasy.

As mentioned earlier, many motherboards share a channel between the M.2 slot and one or more of the SATA connectors. If you have both an M.2 drive and a SATA drive installed, and BIOS only sees one of them, then that's probably the problem. Moving the SATA drive to another header should solve it. Consult the motherboard manual to see if this is the case with your mobo. 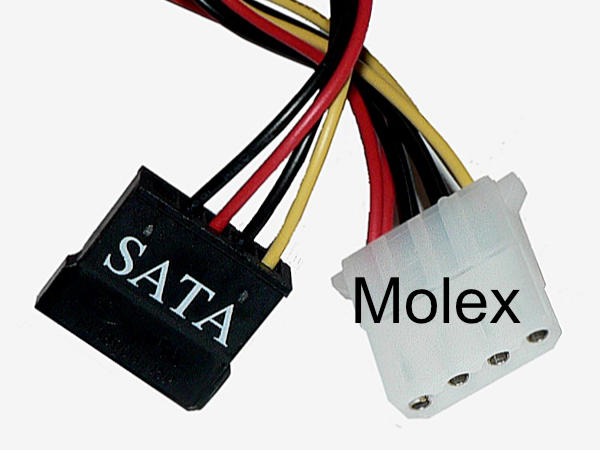 Finally, attach the power connectors to the drives.

The voltages are identical, and Molex-to-SATA power adapters are available if your power supply lacks enough connectors of the correct type. But try to avoid using them if possible, and especially avoid cheaply-made ones.

By the way, M.2 drives don't need power cables. Their power is supplied through the M.2 slot and the ground.

Whichever connector you use, make sure that the power connectors are attached using the correct polarity. The sockets and connectors are shaped so that they will only fit the correct way unless you force them. But they're just plastic, so you could deform or break them if you tried hard enough to attach them in the wrong direction. If the connector doesn't seem to fit the cable, then you're either using the wrong kind of connector or you have it backwards.

If you fire up the computer while a drive power connector is attached backwards, you will immediately and permanently destroy the drive, and possibly the power supply and the motherboard. So make sure you double check to make sure that all the connectors are attached properly.